The Eight Limbs of Ashtanga Yoga include powerful disciplines and practice; among the most familiar is the third, the asana practice. Many people can spend their entire lives sitting comfortably on this branch of Yoga, never striving to climb to the top, where enlightenment, or Samadhi, waits like a ripe apple waiting to be picked. For Caroline Klebl, the practice of asana is the vehicle on her path to Samadhi.

Caroline’s attraction to the path of living and breathing Yoga was apparent at a young age. Born in Germany to her Austrian father and American mother, she lived her early years in Vienna and moved to the US when she was 10. At the age of 14, she made the decision to be a vegetarian, and at 18, she found Yoga through the only Yoga teacher in Breckenridge, CO. “I had heard that to learn Yoga it was necessary to have a guru. I wanted to find my guru, my teacher.”

It was an immediate fit. “Asana practice is very tangible. It’s quite physical, it’s very real; over time you can see the improvement of the yoga postures. Unlike the various styles of meditation practice, where one may be uncertain of the result. When I practice, I’ve always had an incredible experience. You feel energetically, physically, and psychologically much better. I never stopped. The first time I practiced Yoga I loved it. I loved the experience.”

Even though her first teacher may not have been the guru Caroline was looking for, the power of that experience planted the seed that grew into a passion.

In 1999, she felt a need to pursue something greater than herself, and followed that passion to Mysore, India, where she studied under Sri K. Pattabhi Jois for four and a half months. “I was on a quest to find higher states of consciousness; I was inspired by Samadhi and acquiring Siddhis or special powers. I was always interested in philosophy and psychology and different types of spirituality. I wanted to experience some of the things I read about.”

Although Caroline was able to study under one of the most noteworthy teachers of our time, it didn’t always mean her setting for learning was always ideal. “It was quite difficult in India at times, it was not necessarily a serene environment. People were processing their own life experiences.”

When she returned to the US from India, she started to focus on teaching Yoga. She wanted to share the very positive experience she had practicing Yoga. She developed courses and taught led and Mysore style classes and taught her first workshops in Europe in 2002. During this time she also explored other styles of Yoga and learned from reputable Viniyoga and Iyengar Yoga teachers. She felt that the Ashtanga Vinyasa practice was very effective and that her asanas had improved quickly by practicing Ashtanga Yoga.

Caroline continued her Mysore practice diligently and soon returned to India to continue her studies with Sri K. Pattabhi Jois. In the last few years of her teacher’s life, the main Shala, where increasing numbers were making the pilgrimage, became crowded. With Pattabhi Jois, his grandson, Sharath; daughter, Saraswathi Rangaswamy; and all the Yogis in the space, the atmosphere of class could sometimes be confusing. The master then invited Caroline to learn from him in a different part of town where he had a smaller number of students so he could teach her Advanced Asanas. “At this time I began to notice his moral strength and dedication to teaching Yoga asana….I think that was when I finally felt I found the teacher I had been looking for.”

After learning from Pattabhi Jois, she continued her studies by earning a doctorate degree from the India University of Alternative Medicine. Caroline’s thesis became her book, Ashtanga Yoga: the Primary and Intermediate Series. “I always wanted to write a book. It took me about seven years of it being in the back of my mind and I wanted to put it together.” She had previously presented the idea of writing a book on Ashtanga Yoga to Pattabhi Jois.

“He encouraged me to write the book. He also encouraged me to practice Yoga asana and to teach it. As a traditional Indian man, he also valued the importance of marriage. He asked me once, ‘When are you getting married?’”

Caroline hopes her book can be an inspiration for aspiring students, but emphasizes that no book or video can take the place of a real instructor. “You need a connection with a teacher. It’s a lineage in which the practice is passed down from teacher to disciple. After learning from Pattabhi Jois, I feel like I have the strength to assist people who come to my class with their own practice. I feel like I can pass on that same strength that he had. He was connected to life, and how to live correctly. His connection to the asana practice was simple and direct and definite. I can offer that to my students now.”

Caroline takes what she has learned and continues to apply it and share it as she teaches the 200- and 500-hour Yoga teacher training programs she developed. She knows the body is strong and capable of more than what most of us — even some of us Yogis! — realize. She teaches students from all over the world through retreats and teacher trainings, which she conducts in Los Angeles and in beautiful tropical retreat destinations. Her path of teaching and practicing yoga continues to push her to climb each limb, respect each discipline, and reach towards the tender fruit of Samadhi.

Caroline’s Five Pieces of Advice and Encouragement for a New Teacher:

1. Keep up a daily/regular yoga practice. As it is mentioned in the Yoga Sutras, “Sthira Sukham Asanam.” Asanas should be steady and comfortable or provide enjoyment.

2. Do not teach too much or overwork. From an Ayurvedic perspective, it is important not to use the body faster than the seven dhatus or tissue layers can be nourished. This can be accomplished by maintaining a healthy diet, not relying on stimulants to start or complete the day’s tasks, and getting enough sleep.

3. Ahimsa – Do not harm other beings.

5. Svadhyaya – Contemplate the sacred texts on Yoga, such as the Yoga Sutras and the Hatha Yoga Pradipika.

This article was featured in the LA Yoga Magazine. 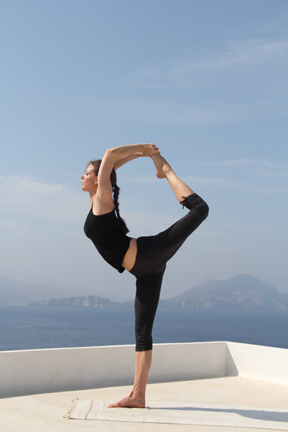 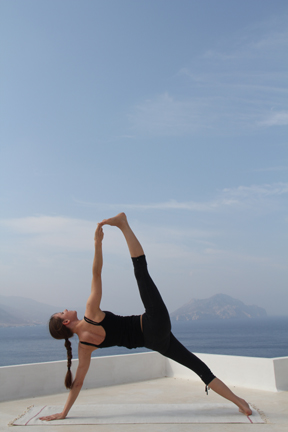