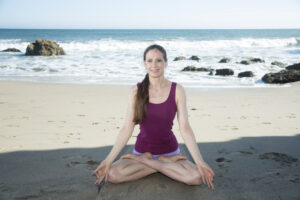 Hatha Yoga, means the balancing of Ha(sun) and Tha(moon) energies. There are two energy channels the Ida(moon) and Pingala(sun) Nadies(energy channels), which originate at each nostril and intersect and spin the chakras along the spine. The practice of Hatha Yoga purifies these two energy channels and moves their energies into the Sushumna Nadi, which leads to the spiritual attainment of Yoga or union.

The Hatha Yoga Pradipika, begins with the following verse.

“Salutation to Adinatha(Shiva), who expounded the knowledge of Haṭha Yoga, which like a staircase leads the practitioner to the pinnacle, Raja Yoga(yoga of meditation).” – Hatha Yoga Pradipika 1.1

The Hatha Yoga Pradipika continues with describing Hatha Yoga as the torch, which dispels the darkness, which surrounds Raja Yoga. Then Svatmarama lists a number of Siddhas(seers), who have taught and attained to Hatha Yoga. A number of yoga postures are named after these Mahasiddhas, including Matsyendra and Bhairava. The Mahasiddhas of Hatha Yoga are said to be still roaming the universe, since they have broken the scepter of death.

According to the Hatha Yoga Pradipika, yoga is to be practiced in a clean room, free of anxieties and as instructed by your guru.

Whereas, the Niyamas of the Hatha Yoga Pradipika are Tapas(spiritual practice), contentment, patience, belief in God, charity, adoration of God, study of sacred scriptures, mantra recitation, developing intellect and sacrifice.

After emphasizing the importance of the Yamas and Niyamas, the Hatha Yoga Pradipika begins to expound upon asana(yoga posture) practice.

“Asana is the first discipline of Hatha Yoga. It should be practiced for gaining steady posture, health and lightness of body.” – Hatha Yoga Pradipika 1.19

Svatmarama indicates that Shiva taught 84 asanas. The descriptions of asanas in the Hatha Yoga Pradipika, include descriptions of how to practice the asana as well as the benefits. For example Shavasana, the corpse posture is described as follows.

“Lying down on the ground, like a corpse, is called Shavasana. It removes fatigue and gives rest to the mind.” – Hatha Yoga Pradipika 1.34

According to the Hatha Yoga Pradipika, of the 84 asanas taught by Shiva, four are essential ones, Siddhasana(posture of the seers), Padmasana(lotus posture), Simhasana(lion’s pose) and Bhadrasana(blessed posture). These four seated postures prepare the practitioner for pranayama and Raja Yoga or meditation.

Siddhasana is practiced, by folding the left leg and placing the heel of the left foot close to the pubic bone, with the left knee resting on the floor. Then fold the right leg and place the right foot on top of the left upper thigh and rest the right knee on the floor. Sit with a straight spine, extend the arms, placing the backs of the hands on the knees, with the palms facing upward and touch the first finger to the thumb, for jnana mudra(the hand gesture of knowledge). Touch the chin to the sternum, gaze between the eyebrows and breathe deeply. According to the Hatha Yoga Pradipika, Siddhasana is the opener of the door of salvation.

Padmasana, the lotus position, is the second essential asana and is described as follows.

”Place the right foot on the left thigh and the left foot on the right thigh, and grasp the toes with the arms crossed behind the back. Press the chin against the chest and gaze on the tip of the nose. This is called the Padmâsana, the destroyer of the diseases of the Yamis or those who have accomplished the Yamas.” – Hatha Yoga Pradipika 1.46

This shloka(verse) of the Hatha Yoga Pradipika, describes Baddha(bound) Padmasana with Jalandhara Bandha, the chin lock.

Ashtanga Vinyasa Yoga is a type of Hatha Yoga. It includes 6 series of yoga postures and a pranayama sequence. Ashtanga yoga instructor, Caroline Klebl teaches yoga teacher training courses in Los Angeles and in beautiful destinations around the world. All levels of yoga practitioner are welcome to attend her courses to improve their yoga practice and learn to teach yoga. To view her current teaching schedule click here…