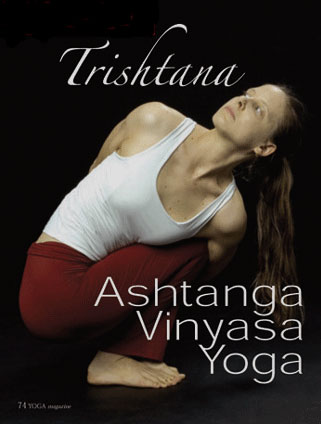 Caroline Klebl’s article Trishtana within Ashtanga Vinyasa Yoga was featured in the Yoga Magazine. In ashtanga vinyasa yoga, awareness is directed into three places. This is referred to as Trishtana.

Ashtanga Vinyasa Yoga is a highly sophisticated method of asana practice. This practice includes six series of yoga postures, which are sequentially integrated and continuously practised throughout a lifetime. In this asana practice, awareness is directed into three places. This is referred to as Trishtana. The three actions into which awareness is directed are the posture (asana) itself, the breath (pranayama) and the looking place (drishti). This placement of awareness turns the mind inward and strengthens concentration. This induces a deeply meditative state. Trishtana is emphasized throughout the Ashtanga Vinyasa Yoga practice.

The Ashtanga Vinyasa Yoga practice consists of hundreds of postures, which are intentionally sequenced and gracefully linked by specific movements between each posture. These movements or Vinyasa are accompanied by either the inhaling or exhaling breath. Vinyasa generates heat in the body and activates the breathing system. In the Asana practice, the breathing system is stimulated by Bandhas and Oujaii Pranayama. Pranayama is the controlling of subtle energy. Oujaii Pranayama is practiced, by slightly contracting the throat. This contraction creates a calming wind-like sound with the breath, which directs awareness to the breath continuously. The breath is regulated by slowing down, deepening and equaling out the length of the inhale and exhale.

There are three bandhas (energy locks or seals), which direct subtle energy in the body. The three Bandhas are Mulah Bandha, Uddiyana Bandha and Jalandhara Bandha. Mulah Bandha is the root lock, which is engaged by contracting the anus and the perineum, in the center of the pelvic floor. In the Hatha Yoga Pradipika it is mentioned that Mulah Bandha moves Apana Vayu (the downward moving breath) upwards into the fire region of the navel. This intensifies the heat, which is said to arouse Kundalini. Kundalini is the dormant energy which lies coiled at the base of the spine. The awakened Kundalini reveals complete liberation to the yoga practitioner.